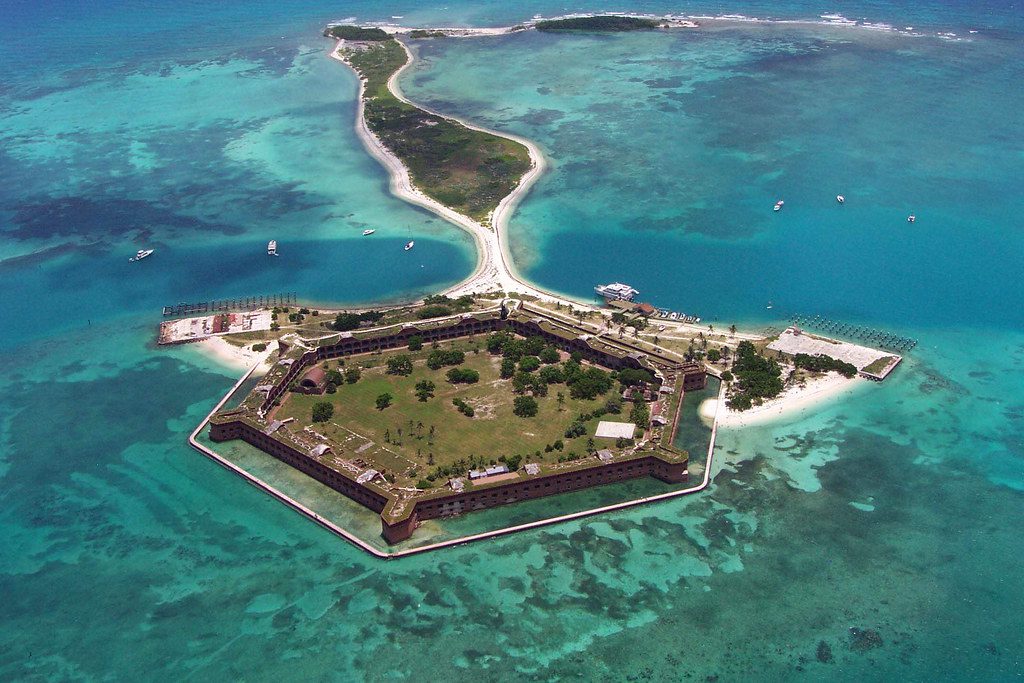 When you visit The Dry Tortugas and Fort Jefferson, you are treated to one of the most unique National Parks in the world. These seven islands are a rare combination of natural and historic resources. Not only are you surrounded by a vast expanse of sea, sky, sandy beaches, and coral reef, but you step into a park rich in history including a 19th century fort, The Civil War, and its most famous prisoner, Dr. Samuel Mudd, who was imprisoned for his involvement in the assassination of President Abraham Lincoln.

Fort Jefferson itself is a six-sided building constructed of 16 million handmade red bricks. In 1825 a lighthouse was built on Garden Key to provide warning to sailors about the dangers of reefs and shoals surrounding the Dry Tortugas. 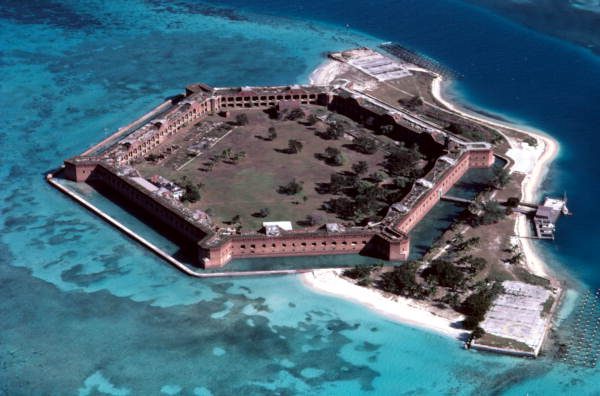 Fort Jefferson was built to protect one of the most strategic deepwater anchorages in North America. By fortifying this spacious harbor, the United States maintained an important “advance post” for ships patrolling the Gulf of Mexico and the Straits of Florida. Nestled within the islands and shoals that make up the Dry Tortugas, the harbor offered ships the chance to re– supply, refit, or seek refuge from storms. The location of the Tortugas along one the world’s busiest shipping lanes was its greatest military asset. Though passing ships could easily avoid the largest of Fort Jefferson’s guns, they could not avoid the warships that used its harbor. 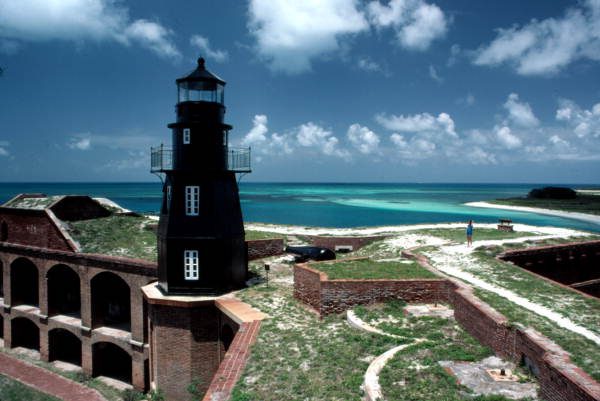 The design of the fort called for a three-tiered six-sided 420 heavy-gun fort, with two sides measuring 325 feet, and four sides measuring 477 feet. The walls met at corner bastions, which are large projections designed to allow defensive fire along the faces of the walls they joined. The heavy guns were mounted inside the walls in a string of open casemates, or gunrooms, facing outward toward the sea through large openings called embrasures. Fort Jefferson was designed to be a massive gun platform, impervious to assault, and able to destroy any enemy ships foolhardy enough to come within range of its powerful guns.

The fort remained in Federal hands throughout the Civil War. With the end of hostilities in 1865, the fort’s population had declined to 1,013, consisting of 486 soldiers or civilians and 527 prisoners. The great majority of prisoners at Fort Jefferson were Army privates whose most common transgression was desertion. The most common transgression of civilian prisoners was a robbery. 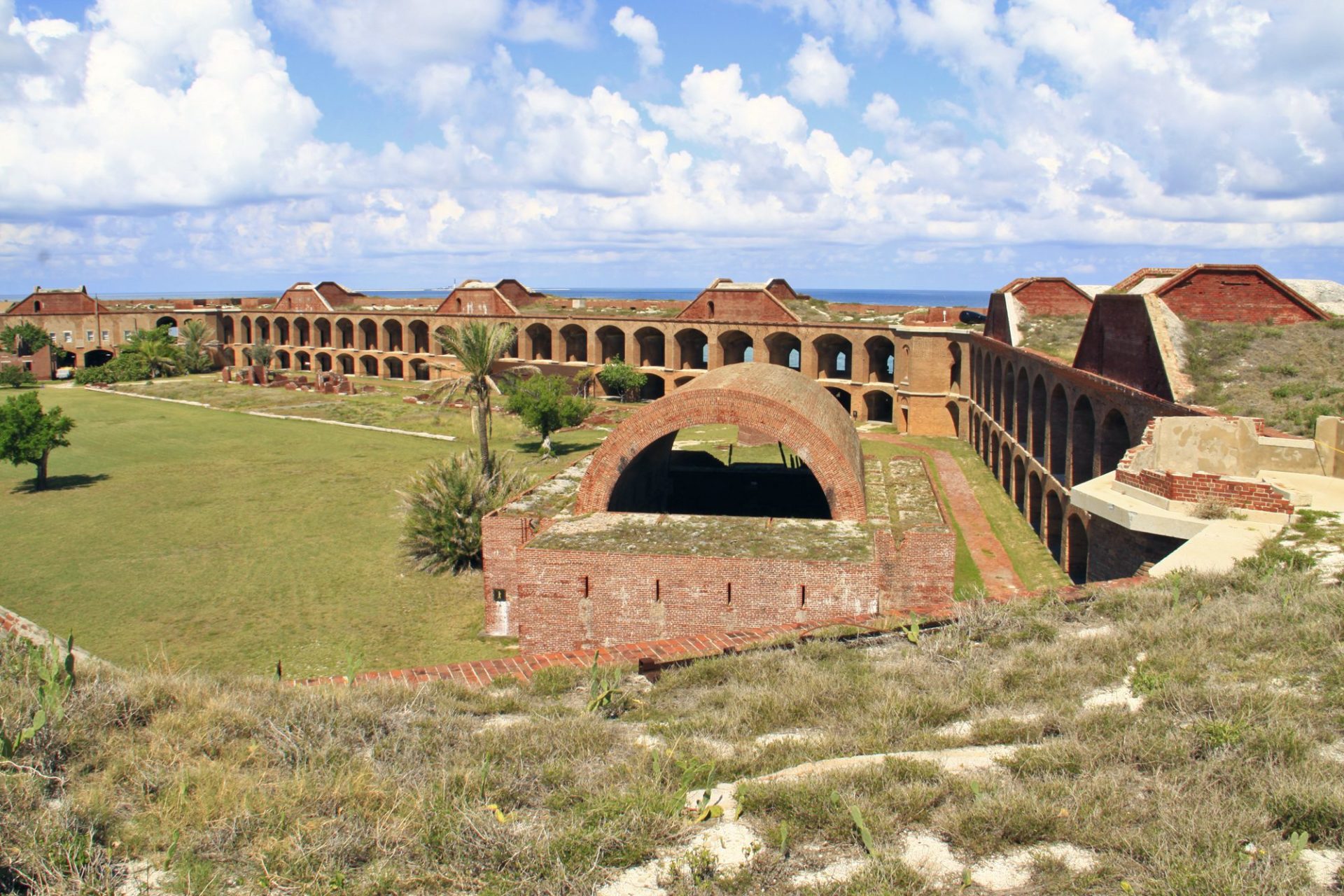 By 1888, the military usefulness of Fort Jefferson had waned, and the cost of maintaining the fort due to the effects of frequent hurricanes and the corrosive and debilitating tropical climate could no longer be justified.

In 1888, the Army turned the fort over to the Marine-Hospital Service to be operated as a quarantine station. On January 4, 1935, President Franklin D. Roosevelt, who visited the area by ship, designated the area as Fort Jefferson National Monument. 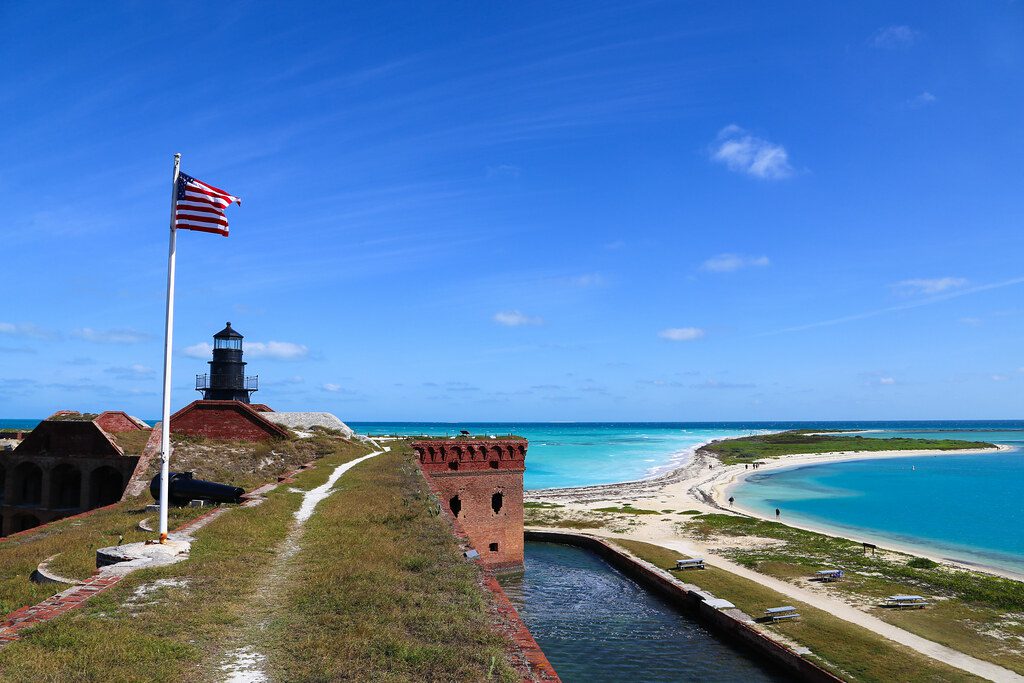 Fort Jefferson was also used as a prison for criminals and deserters during and after the Civil War. The most famous of these prisoners was Dr. Samuel Mudd, who was imprisoned for his involvement in the assassination of President Abraham Lincoln.

With its rich historical background, Fort Jefferson finally received its designation as a National Monument in 1935, and then upgraded to National Park status by President George Bush in 1992.

According to www.nps.gov. drytortugas.com. Source of photos: internet