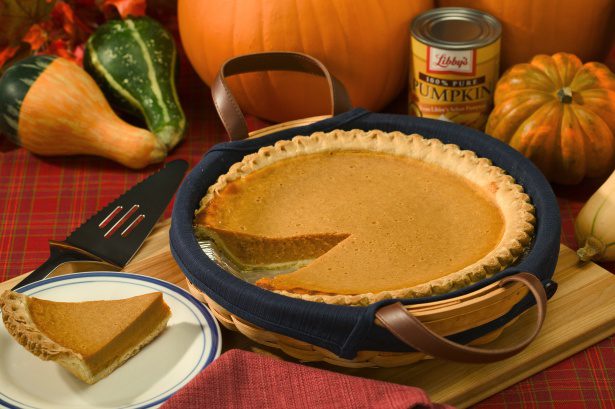 Pumpkin pie is a dessert pie with a spiced, pumpkin-based custard filling, though other types of squash are more commonly utilized. The pumpkin is a symbol of harvest time, and pumpkin pie is generally eaten during the fall and early winter. In the United States and Canada, it is usually prepared for Thanksgiving, and other occasions when pumpkin is in season.

The pie filling ranges in color from orange to brown and is baked in a single pie shell, rarely with a top crust. The pie is generally flavored with cinnamon, powdered ginger, nutmeg, and cloves. Allspice is also commonly used and can replace the clove and nutmeg, as its flavor is similar to both combined. Cardamom and vanilla are also sometimes used as batter spices. The spice mixture is called pumpkin pie spice. The name pumpkin originated from the Greek word for “large melon” which is “pepon.” “Pepon” was changed by the French into “pompon.”  The English termed it “pumpion” or “pompion.”

The pumpkin is native to the continent of North America. The pumpkin was an early export to France; from there it was introduced to Tudor England, and the flesh of the “pompion” was quickly accepted as pie filler. During the seventeenth century, pumpkin pie recipes could be found in English cookbooks, such as Hannah Woolley’s The Gentlewoman’s Companion (1675).Pumpkin “pies” made by early American colonists were more likely to be a savory soup made and served in a pumpkin than a sweet custard in a crust. 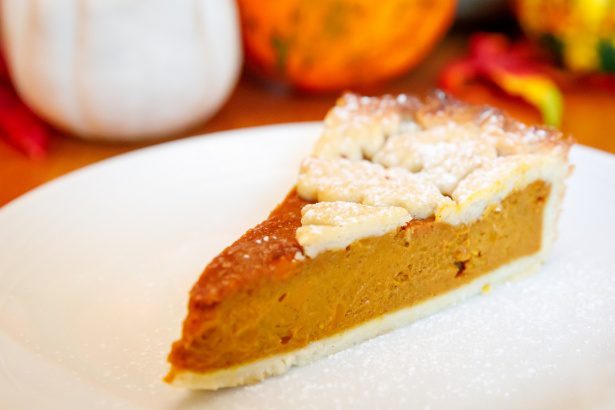 It was not until the early nineteenth century that the recipes appeared in Canadian and American cookbooks or pumpkin pie became a common addition to the Thanksgiving dinner. The Pilgrims brought the pumpkin pie back to New England, while the English method of cooking the pumpkin took a different course. In the 19th century, the English pumpkin pie was prepared by stuffing the pumpkin with apples, spices, and sugar and then baking it whole. In the United States after the Civil War, the pumpkin pie was resisted in southern states as a symbol of Yankee culture imposed on the south, where there was no tradition of eating pumpkin pie. Many southern cooks instead made sweet potato pie, or added bourbon and pecans to give a southern touch.

Today, throughout much of Canada and the United States, it is traditional to serve pumpkin pie after Thanksgiving dinner. Additionally, many modern companies produce seasonal pumpkin pie-flavored products such as candy, cheesecake, coffee, ice cream, french toast, waffles and pancakes, and many breweries produce a seasonal pumpkin ale or beer; these are generally not flavored with pumpkins, but rather pumpkin pie spices.

According to en.wikipedia; whatscookingamerica.net. Source of photos: internet