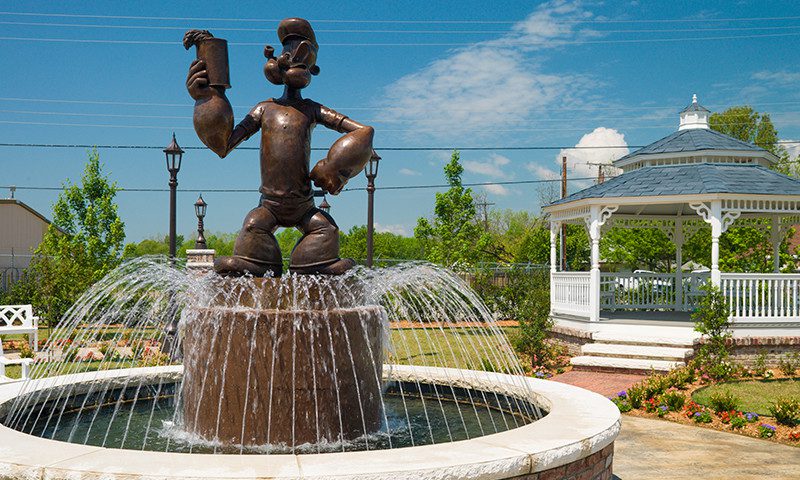 (uskings.us) Alma, Arkansas calls itself the Spinach Capital of the World. Here’s how that happened. Back in 1987, residents George Bowles and Wolf Grulkey were sitting around drinking coffee and doing some noggin scratching over the question of how to put their little community of 2500 on the map.

The successful production of spinach evolved into a dominant industry. By March 26, 1937, the growers had erected a statue of the cartoon character Popeye in the town because his reliance on spinach for strength led to greater popularity for the vegetable, which had become a staple cash crop of the local economy. There are actually two statues of Popeye in the town — one in downtown and one in front of city hall.

Around 1987, Alma called itself the “Spinach Capital of the World” because the Allen Canning Company based in Alma canned more than half of all the spinach canned in the U.S., about 60 million pounds (27,000,000 kg) annually. The town has had various statues of the cartoon character Popeye, because of his connection to canned spinach; the most recent one was erected in 2007. Cast in bronze, it sits atop a fountain holding a can of spinach. It is the centerpiece of Popeye Park. Crystal City Texas is also considered the Spinach Capital of the World. 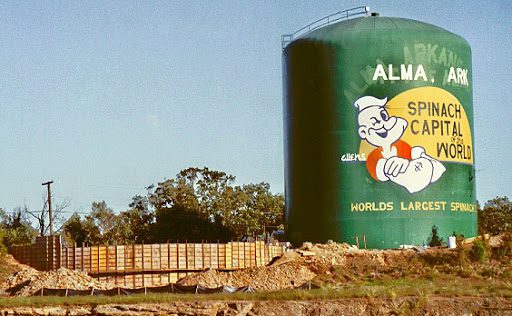 The annual Spinach Festival is hosted at the City Park and Community Center on the third weekend in April. First held in 1986, the festival is sponsored by the Alma Chamber of Commerce and the Alma Advertising & Promotion Commission. The festival brings carnival rides, crafts, food and live music. A spinach eating contest takes place at noon, followed by a spinach drop. A package of spinach is dropped from an Alma Fire Department ladder truck onto a board with entrant’s names, with the winner receiving a cash prize.

According to en.wikipedia; arkansasroadstories.com. Source of photos: internet