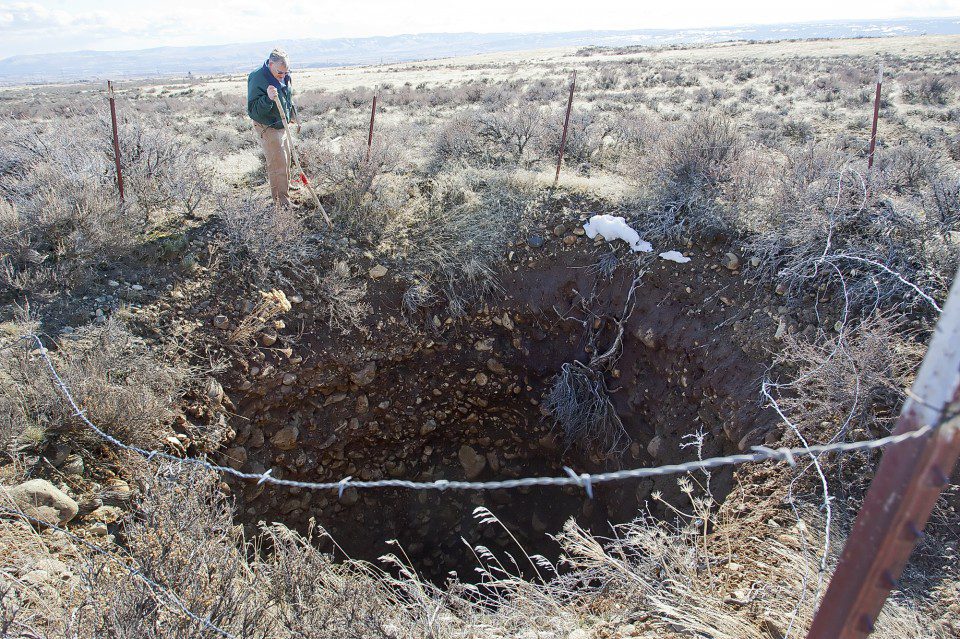 Local residents, authorities, and indigenous tribes knew of the hole for decades before Waters bought his property.

As the story goes, the pit was about nine feet in diameter, with walls constructed out of hand-placed bricks stretching 15 feet down before transitioning into dirt and darkness. Known popularly as “the Devil’s Hole,” the locals all agreed that there was something rather unsettling about the hole’s existence, but no one cared – nor wanted – to think too hard about what that “something” might be.

Manastash Ridge residents instead used the hole as a garbage dump and decided not to question the eerie fact that the pit never appeared to fill up.

According to Waters’s interview with Coast to Coast AM host Art Bell, once Waters realized that the hole wasn’t showing any signs of filling up, he decided to test it. His plan was to bring thousands of feet of fishing line and a sturdy fishing rod out to the hole, add weight to the fishing line, and then measure how far down it went before hitting the bottom.

By the end of his test, Waters got more than he bargained for: The hole had no bottom. And if a bottom does exist, it’s deep enough that the weighted line failed to go slack after 80,000 feet. Neither Waters nor anyone else has ever confirmed reaching the bottom.

People who have been brave enough to approach the pit all noticed something peculiar about the area’s wildlife – or more aptly, the lack thereof. Animals obviously hated the hole and would do their best to stay as far away from it as possible. Waters even reported that his own dogs refused to approach the hole. When he tried to bring them closer to it, they dug their paws into the ground in protest.

Other visitors even took note of the fact that birds avoided flying directly over it and no other small animals ever appeared near it. According to various reports, the only signs of wildlife were piles of bones strewn around the mouth of the pit.

Mel Waters’s interview with Art Bell on Coast to Coast AM brought the hole into public consciousness, and one of the stories he told during the call was absolutely chilling. According to Waters, locals used the hole to get rid of anything from old equipment to cattle remains. But, apparently, throwing something down the hole didn’t guarantee that it would stay there. During the interview, Waters claimed that when one of his neighbors’ dogs passed away, his neighbor brought the dog to the hole to get rid of it.

The neighbor then allegedly told Waters that after he’d done so, he later saw his dog running in the forest, alive and well – and still wearing its collar.

According to ranker.com. Source of photos: internet