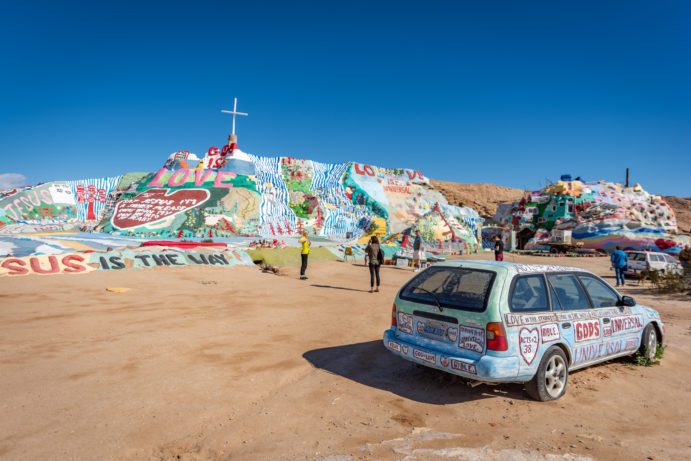 Remember that scene in Into the Wild when Christopher McCandless (played by Emile Hirsch) meets Tracy Tatro (played by Kristen Stewart)? That was in Slab City. It’s a place where hobos can live in peace, off the grid, free to smoke crack and be hippies. There are 150 people who permanently live there, but squatters and RV owners sometimes visit to pass the time. Decommissioned and uncontrolled, Slab City is a bastion for the free spirited anti-socialite. 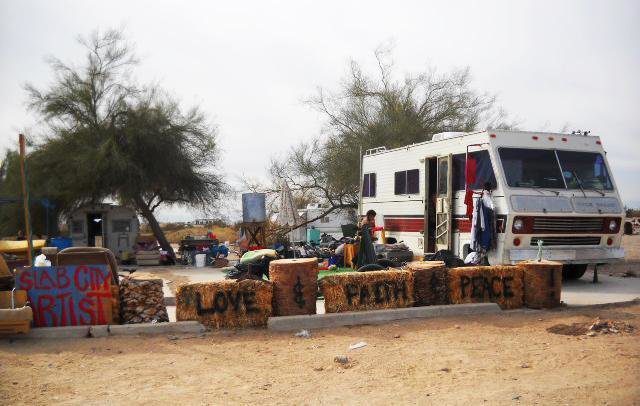 Slab City, also called The Slabs, is an unincorporated, off-the-grid squatter community consisting largely of snowbirds in the Salton Trough area of the Sonoran Desert, in Imperial County, California. It took its name from concrete slabs that remained after the World War II Marine Corps Camp Dunlap training camp was torn down. Slab City is known for a lifestyle that contradicts ordinary, civilized lifestyles.

Slab city has a free lending library, an outdoor music venue called The Range and The Salvation Mountain.The settlement also has an internet cafe, a hostel, and a skatepark built inside what remains of the military base swimming pool. Located just east of California State Route 111, the entrance to Slab City is easily recognized by the colorful Salvation Mountain, which is a small hill approximately three stories tall and entirely covered in latex paint, concrete and adobe, and festooned with Bible verses. It was a project built over two decades by Leonard Knight. The work is a 50 ft-tall piece of religious folk art; “an unofficial centerpiece for the community and the area’s anarchic creative identity”, according to a 2020 report. In 2002, Salvation Mountain was named a Congressional National-Art Treasure. But despite the lack of running water and the desolate landscape, Slab City remains a remarkable part of American culture and an interesting insight into an older generation of liberal Freebirds.

According to ranker.com; en.wikipedia