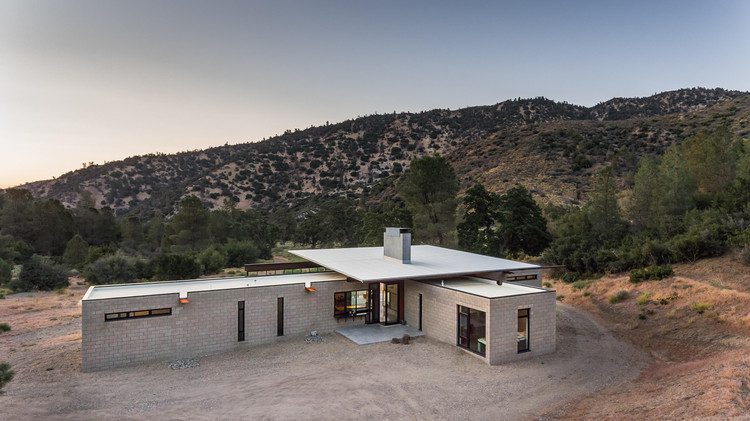 The project’s materials were selected for their durability, with the design approach driven by a scavenger mentality: to do more with less, including using salvaged or recycled materials where possible.

For Bruce Shafer and Carol Horst, designing their vacation home to be off the grid wasn’t a choice. Together, the couple and the firm designed a home that is not only energy and water neutral, but is built to last in the high desert hills with little maintenance—underlining the importance of durability in sustainable design.

In such an environment—the mountains get just 12 inches of rain a year—water is a scarce but vital commodity. But rather than draw from a faraway main or rely on a cistern, the 3,390-square-foot house, called Sawmill, pulls all its water from the ground, depositing it in a tank located uphill from the home to ensure constant pressure. It then returns the wastewater to the ground, via a septic tank and leach field.“The idea is to recharge the groundwater rather than capture the rain that hits the roof,” Kundig says.

The water pump, along with everything else electrical in the house, is powered by an 8.4-kilowatt photovoltaic array. But Olson Kundig kept energy needs to a minimum by siting the building to take full advantage of cooling cross breezes and morning and evening light. According to the firm’s estimates, Sawmill, despite its size, generates 96 percent less CO2 than the typical single-family house.

The striking thing about Sawmill is how low-tech it is: Mechanical and electrical elements are kept to a minimum, while passive and hand-operated functions dominate. For example, heat from the central fireplace is directed down into an 840-square-foot basement, where it can then radiate across the underside of the main level’s floors.

Though it was completed in 2014, Sawmill has a timeless solidity; one could imagine it has stood for decades already—or for centuries into the future. That’s no illusion: The walls are made with concrete masonry units, reinforced with rebar, and filled with concrete grout. The weathered, rusty roof beams are steel—25 tons total—salvaged from sites around the home where Shafer, who operated a cement factory nearby, had contacts. Wood for detailing, such as for the interior stair treads and sliding doors, was taken from a barn near the site.

Indeed, much of the building is made with salvaged parts, and while it appears coherent and fully designed, much of its mass owes to the serendipity of finding large steel components. “They told me, ‘Bruce, get a list of all the steel available,’ and then they made use of the steel they had on hand,” Shafer says.

The building was easy enough to assemble that Shafer was able to act as a general contractor, and, with the help of his sons, do some of the work themselves on weekends. “We laid the tubing for the radiant floors and milled the dining room table, which was a door Tom had salvaged from nearby,” he says. “I’m an engineer and a hands-on guy, so that was a lot of fun.”

For all its monumentality and high-desert austerity on the outside, the house is surprisingly intimate inside. Inspired by a campground, the home is split into three wings around a central hearth; the fourth side is a 12-by-26-foot glass wall that can open onto a patio with a few turns of a large metal wheel, which the firm salvaged from a nearby scrapyard.

So far, Sawmill has exceeded Shafer’s expectations. “It’s a second home, and we didn’t want to spend every weekend doing a bunch of work on it,” Shafer says. “We wanted a low-maintenance structure that would last, and that’s exactly what it is.” More than that, Sawmill shows that sustainable domestic architecture doesn’t need to be fancy to work wonders.