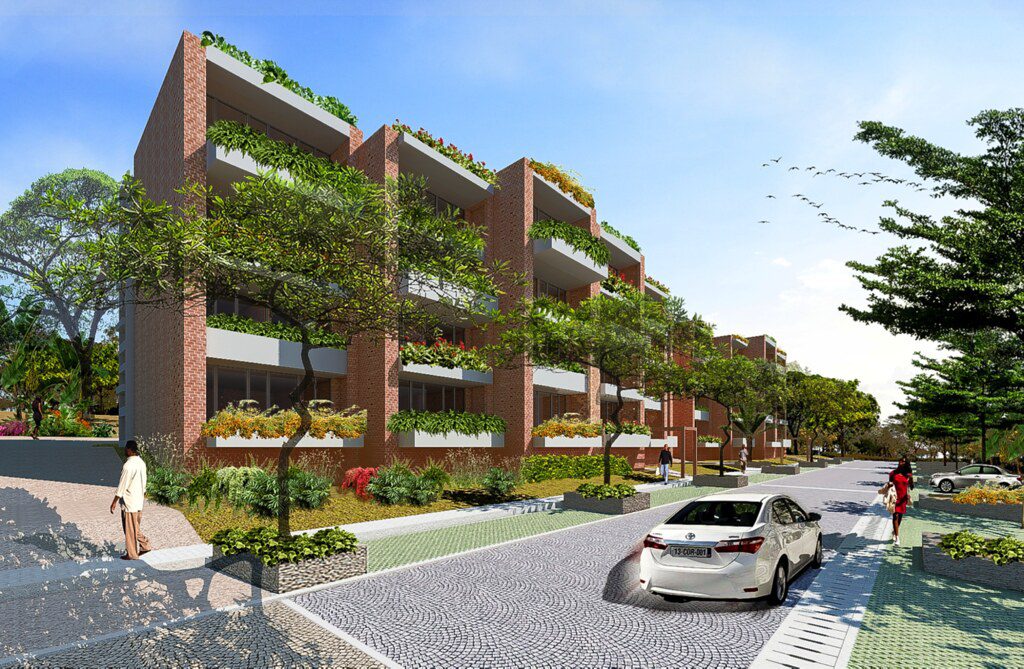 San Francisco–based David Baker Architects (DBA) doesn’t start each project with a predetermined sustainability goal. “We want to do the most sustainable, affordable housing we can possibly afford,” says principal Daniel Simons, FAIA. This ethos drove the firm’s approach to the LEED Platinum–certified Lakeside Senior Apartments, which provides 92 affordable units for low-income, special-needs, and formerly homeless senior citizens on a sloped site just a half block from Lake Merritt in Oakland, Calif.

The city’s predominant street grid is rotated about 45 degrees from north-south and Lakeside Senior Apartments’ L-shaped site encompasses the southern half of a block, with two parallel five-story apartment wings that enclose a protected courtyard. This central green space is protected by a glass fence but still engages the street, and it sets the tone for a series of daylit public spaces throughout the complex that encourages social interaction among the residents. A fifth-floor kitchen and dining and community rooms open onto a rooftop garden where residents can grow vegetables.

A smaller outdoor terrace is located on the southeast corner of the fourth floor, and more intimate interior spaces punctuate each of the building’s corridors, including at the center of a bridge that connects the two apartment blocks. “We’re trying to create many opportunities for informal connections between neighbors to fight isolation, [which is a] big issue with seniors,” Simons says.

Maximizing daylight while still achieving a tight building envelope that can be heated and cooled efficiently—DBA predicts a 70.5% reduction from the average EUI for the building type—required thoughtful orientation and shading of openings. Along the southeast façade, on 2nd Avenue, apartments open onto long decks that provide ample individual outdoor space while also creating recesses that shade interiors from solar heat gain. The windows on this southeast face that are not protected by those decks feature sunshades made from perforated sheet metal.

To supplement the shading strategies, DBA deployed heat recovery ventilators (HRVs), which have proved critical to providing balanced mechanical services while saving energy and minimizing tenants’ utility bills.The systems have required a bit of a learning curve, as tenants didn’t initially understand how the HRVs’ fans work. “Tenant education is critical,” Simons observes, which is true for achieving many sustainable goals, especially on a tight budget.

DBA exploited the site’s slope to give access to underground parking from the grade at the north end of the building. The garage accommodates 60 cars—a high number for the project, but it also serves another senior apartment building across the street that previously used this site for surface parking. Now, instead of blacktop, 30% of the site supports vegetation, mostly native or climate-appropriate, where the previous parking lot, with its impervious surface, supported none. Raised planters and permeable paving allow 80% of rainwater to be managed on-site.

David Baker Architects has received many awards for sustainability, especially for relatively low-budget projects such as the Lakeside Senior Apartments, but the firm’s approach is incremental, and the welfare of the inhabitants is key.