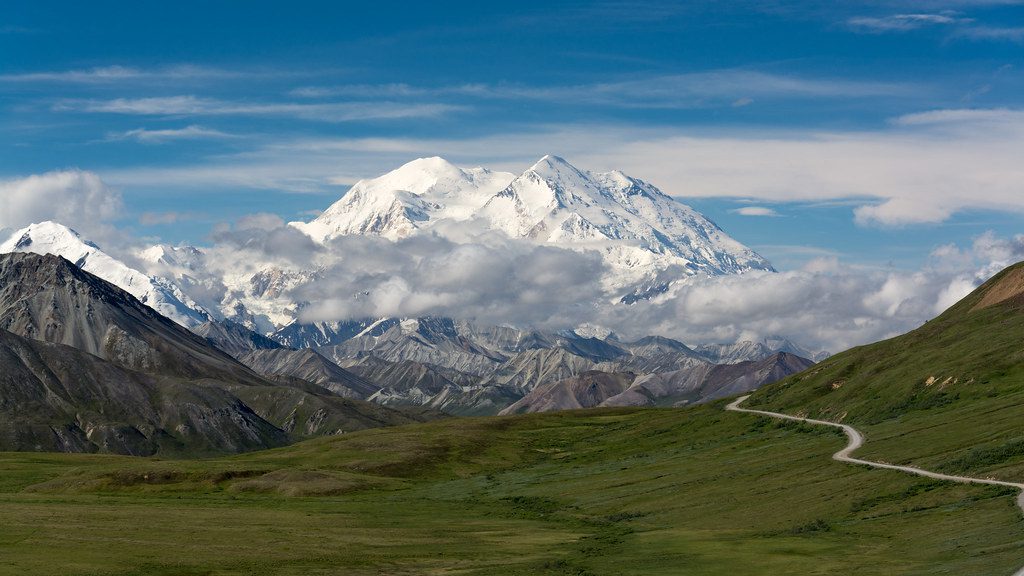 Denali is about 210 kilometers (130 miles) north-northwest of Anchorage. Sixty million years ago, tectonic uplift pushed Earth’s crust upward, forming Denali and the other Alaska Range mountains. Denali is the centerpiece of the Denali National Park and Preserve, which spans 2.4 million hectares (6 million acres) of land.

“Denali” comes from Koyukon, a traditional Native Alaskan language, and means “the tall one.” This name had been used for many generations and was used by early non-Native researchers and naturalists. But in 1896, William A. Dickey, a prospector, began calling Denali “Mount McKinley,” in honor of William McKinley, a presidential candidate at the time. After McKinley became president and was later assassinated, Congress formally recognized the name in 1917, despite McKinley’s tenuous ties to Alaska (he had never visited). But Native Alaskans, as well as locals of varied backgrounds, continued to call the mountain Denali. In 1975, a movement began to rename the mountain Denali, but it was blocked by politicians in Ohio, McKinley’s home state. Finally, President Barack Obama and Secretary of the Interior Sally Jewell took action in 2015 to change the name back to Denali, which is now its official name.

Denali is considered an extremely difficult climb due to the severe weather and steep vertical climbs. In 1906, physician and explorer Frederick Cook was famously reported to have reached the summit, a claim that was later found false. Hudson Stuck, Harry Karstens, and their team of climbers were the first on record to actually reach the summit in 1913. Since then, several hundred people attempt to climb Denali each year.

According to nationalgeographic.org. Source of photo: internet