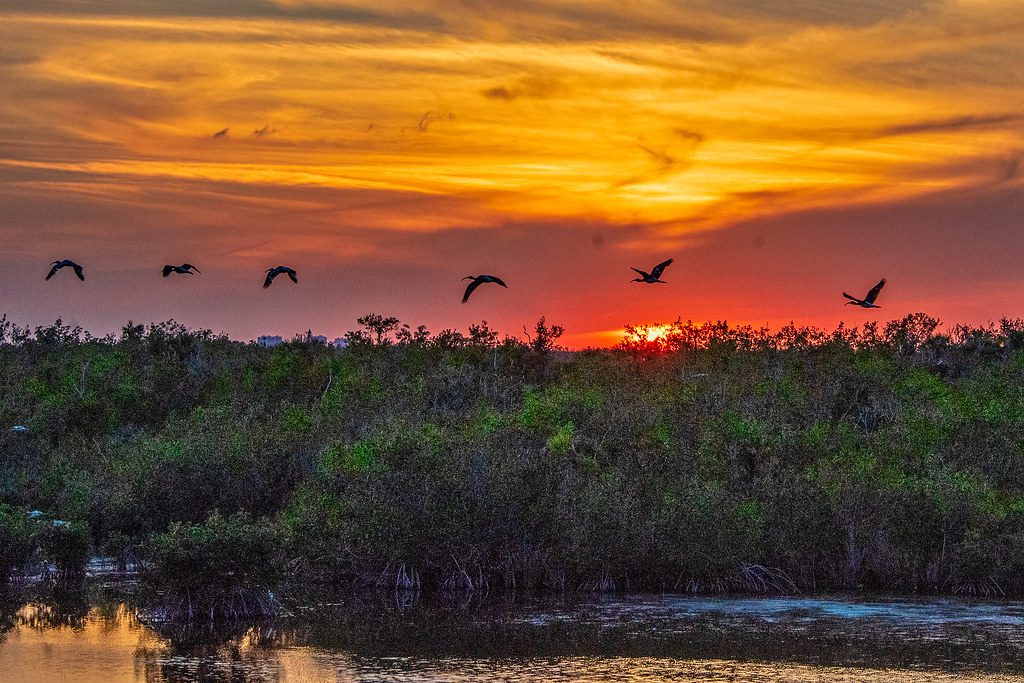 It is the third-largest national park in the lower 48 states after Death Valley and Yellowstone. It has been declared an International Biosphere Reserve, a World Heritage Site, and a Wetland of International Importance, one of only three locations in the world to appear on all three lists. Most national parks preserve unique geographic features; Everglades National Park was the first created to protect a fragile ecosystem. The Everglades are a network of wetlands and forests fed by a river flowing .25 miles (0.40 km) per day out of Lake Okeechobee, southwest into Florida Bay. The Park is the most significant breeding ground for tropical wading birds in North America and contains the largest mangrove ecosystem in the western hemisphere. It is home to 36 threatened or protected species including the Florida panther, the American crocodile, and the West Indian manatee, and supports 350 species of birds, 300 species of fresh and saltwater fish, 40 species of mammals, and 50 species of reptiles. The majority of South Florida’s fresh water, which is stored in the Biscayne Aquifer, is recharged in the park. Humans have lived for thousands of years in or around the Everglades. Plans arose in 1882 to drain the wetlands and develop the land for agricultural and residential use. As the 20th century progressed, water flow from Lake Okeechobee was increasingly controlled and diverted to enable explosive growth of the South Florida metropolitan area. The park was established in 1934, to protect the quickly vanishing Everglades, and dedicated in 1947, as major canal-building projects were initiated across South Florida. The ecosystems in Everglades National Park have suffered significantly from human activity, and restoration of the Everglades is a politically charged issue in South Florida.