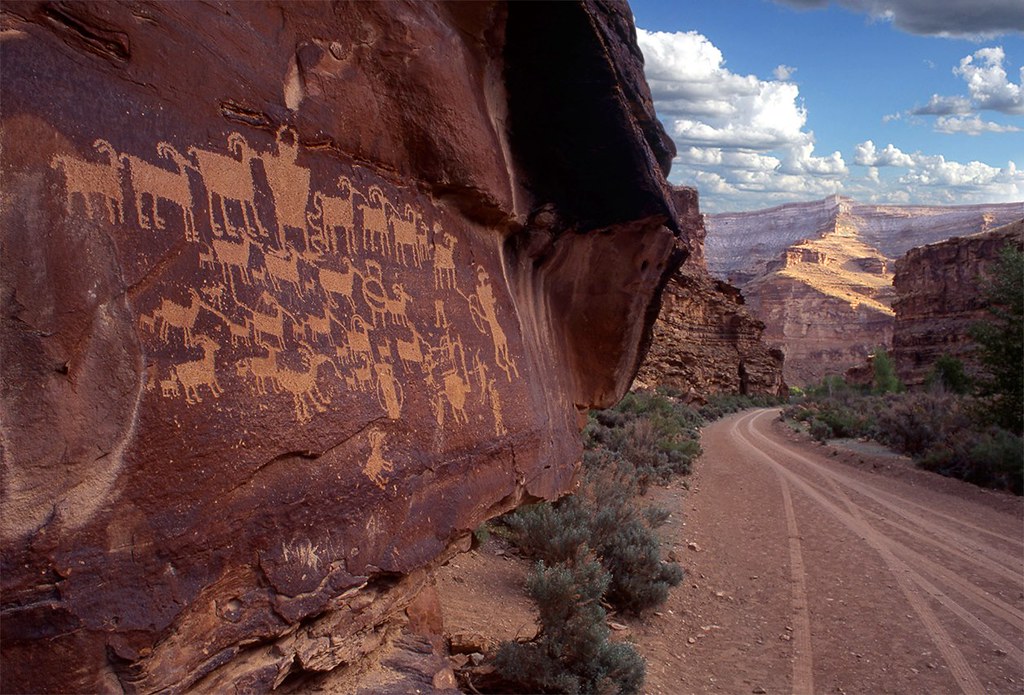 Ninemile Canyon (also Nine Mile Canyon) is a canyon, approximately 40 miles (64 km) long, located in Carbon and Duchesne counties in eastern Utah, United States. Promoted as “the world’s longest art gallery”, the canyon is known for its extensive rock art, most of it created by the Fremont culture and the Ute people. The rock art, shelters, and granaries left behind by the Fremont make Ninemile Canyon a destination for archaeologists and tourists alike.

There are at least an estimated 1,000 rock art sites in the canyon, with more than 10,000 individual images.The true figures may be ten times as high, but there is no question that rock art is more concentrated here than anywhere else in North America. Much is in the form of pecked petroglyphs, and there are many painted pictographs as well. Researchers have also identified hundreds of pit-houses, rock shelters, and granaries, although only a limited amount of excavation has been carried out. Many of these structures are located high above the canyon floor on cliff ledges, pinnacles, and mesas. They were built by the Fremont, whose presence in Ninemile Canyon has been dated at AD 950–1250. Indeed, Ninemile Canyon was one of the locations most heavily occupied by the Fremont.  In contrast to the purely hunter-gatherer cultures that surrounded them, the Fremont practiced agriculture, growing corn and squash along the canyon bottom.

Compared to other Fremont areas, relatively little pottery is found in Nine Mile, suggesting that beans, which must be boiled for hours to become edible, were not an important part of the local diet.   The Fremont left irrigation ditches and earthen lodges on the canyon floor that could be seen as late as the 1930s, but are no longer visible after generations of modern cultivation.

By the 16th century the ancestral Utes were in the canyon. They added to the rock art already on the walls, but in styles of their own. Many scenes, for example, depict Ute hunters on horseback and date to the 1800s. Despite the number of Ute artifacts found in Nine Mile, there is no archaeological evidence of any Ute camps or residences.