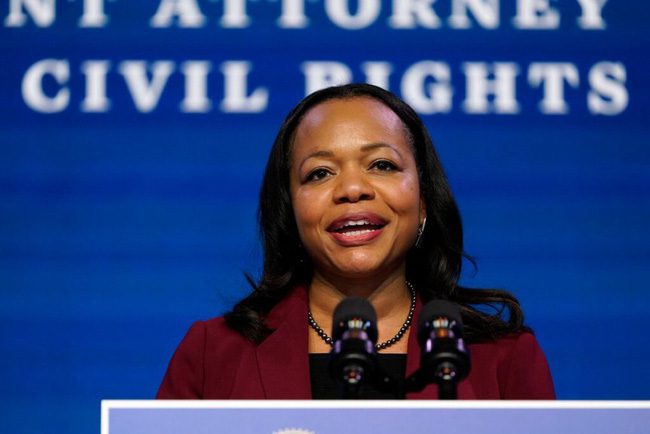 The Senate confirmed Kristen Clarke to lead the Civil Rights division of the Justice Department — making her the first woman and the first Black woman to helm the powerful post.

In a vote of 51-48, the Senate confirmed Clarke as Assistant Attorney General for Civil Rights. Sen. Susan Collins of Maine was the only Republican to vote in favor of Clarke’s nomination, which was notably held on the one-year anniversary of George Floyd’s death.

Clarke previously led the Civil Rights Bureau at the New York attorney general’s office. In 2015, she was also named head of the Lawyers’ Committee for Civil Rights Under Law, during which time the organization said it filed more than 250 lawsuits on voting rights, education, hate crimes and housing, among other areas.

Clarke was sworn in Tuesday evening by Vice President Kamala Harris, whose office called Clarke “a tireless champion of equal justice” in a statement before the ceremony.

Her nomination was met with opposition from Republicans, who accused Clarke of antisemitism. The accusation stemmed from an incident in 1994 in which the Harvard Black Students Association, a group Clarke led at age 19, invited a professor accused of promoting antisemitic conspiracy theories to speak. Clarke defended the decision at the time in the Harvard Crimson, the school’s student newspaper.

She acknowledged this past January that giving the professor a platform was a mistake, and touted her record on antisemitism in her civil rights work. Republicans also took issue with the sharp attacks on opponents on Twitter, including lawmakers such as Sens. Joe Manchin, D-W. Va., and Lisa Murkowski, R-Alaska.

Before voting on her nomination, Arkansas Republican Sen. Tom Cotton called Clarke “highly partisan” and suggested that because of her past comments calling former President Donald Trump’s judicial nominees “white male extremists.” Cotton also raised the issue of her statements on police, including a June 2020 Newsweek op-ed headlined: “I Prosecuted Police Killings. Defund the Police—But Be Strategic.”

“Ms. Clarke has consistently demonstrated that she’s more interested in attacking police and calling everybody a racist than finding the facts or reviewing the evidence,” Cotton said.

“Early data from this year suggests that 2021 may even be worse, but apparently the president’s response to this violent crime is to have a proponent of defunding the police help run the Department of Justice,” he said.

However, Clarke’s nomination was praised by Democrats and civil rights groups.

“At this moment in history, filling this division, the civil rights division, on the anniversary of George Floyd’s murder on the streets of Minnesota, we are choosing the first woman of color in the history of the United States to head this division,” Sen. Dick Durbin, D-Ill., said on the Senate floor. “It is a historic choice. It shouldn’t be trivialized by those who want to paint a caricature of a woman not even close to the truth.”

According to nbcnews.com. Source of photos: internet