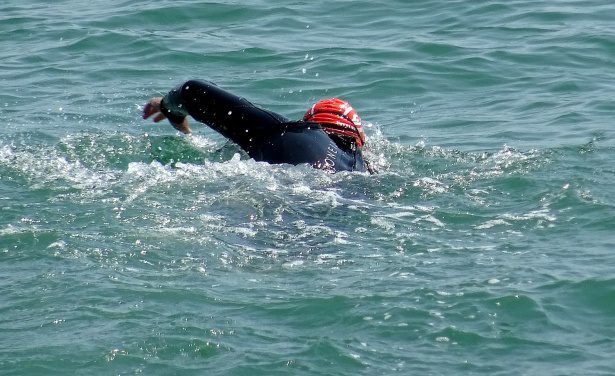 In early 2009 for 24 days ending on February 5 she swam several sections of the Atlantic Ocean from the Cape Verde Islands off Africa to Chacachacare Island in Trinidad off Venezuela (a total of 2,160 mi (3,480 km)), spending much of the time in a shark cage while swimming up to 8 hours a day, battling strong winds and waves up to 30 feet.

“She swam 19 of 24 days,” said David Higden, Jennifer Figge’s business manager. “It turned from an endurance swim into an extreme adventure swim. She didn’t get into the water as much as she wanted, because the waves were so high. The weather was so extreme the crew had trouble seeing her in the water.”

Figge first took up endurance challenges in her 30s when her seven-year-old son asked her to give up smoking. Her new habit became extreme sports, starting with a run across the state of Iowa. Twenty years later, the son is a racing driver, and she has logged 3,000 miles on foot, and nearly two dozen maritime crossings. On her list of achievements, she claims to have run 180 miles across Mexico in 1995 – including the final 60 miles with a cast on her left leg.

She has said she was inspired to perform her latest feat by a turbulent trans-Atlantic flight and by Gertrude Ederle, the first woman to swim the Channel in 1926. Figge told the AP she kept a picture of Ederle on board. “We have a few things in common,” she said.

For safety, she was to make the journey in the confines of a steel and kevlar cage hooked to the rear of a catamaran, Carried Away, with a crew of Nasa and Boeing engineers, a doctor, and a diver. An electro-magnetic device in the cage was meant to repel predators. In the event, there were no sharks – though among the marine life she did see were a pod of pilot whales, turtles, dolphins, and Portuguese men-of-war.

Figge intended to swim to the Bahamas, but on January 21, 2009 Higden posted an update: “Winds of 25 knots and waves as high as 30 ft have wreaked havoc with their movements and Jennifer’s swimming. They are forced to pursue a different route, in search of more amenable weather. The catamaran is heading south.”

She arrived at Chacachacare Island, an abandoned leper colony, on 5 February, 2009.

According to en.Wikipedia; theguardian.com. Source of photo: internet