The GFRR was notable for helping Walt Disney rediscover his childhood fascination with trains, which led him to build the Carolwood Pacific Railroad, a ridable miniature railroad in his backyard. The GFRR also influenced the design of the Disneyland Railroad within the Disneyland theme park in Anaheim, California. 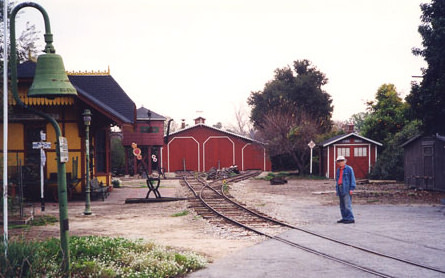 In 1938, Disney animator Ward Kimball, a lifelong railfan, purchased a passenger coach, built-in 1881 by the Barney and Smith Car Company, from the Carson and Colorado Railroad. His wife Betty suggested that he should also have a locomotive to pull the coach. A suitable locomotive, the Sidney Dillon, was purchased for $400 from the Nevada Central Railroad, which was selling it for scrap. Over the course of several years, Kimball, his family, and his friends worked to restore the engine to operating condition. The railroad became operational in 1942. Kimball named his railroad Grizzly Flats Railroad (GFRR), which eventually consisted of 274.3 m of 914 mm narrow-gauge track, including a 152.4 m mainline. The GFRR became the first full-size backyard railroad in the United States. Kimball died in 2002, but his family continued to operate the GFRR until 2006.