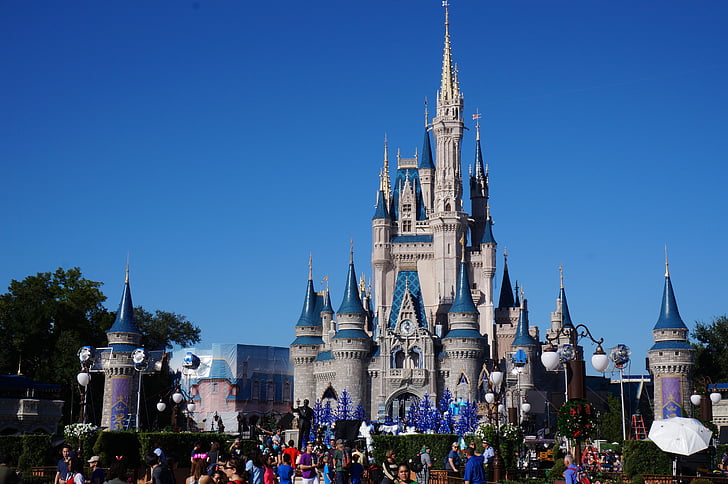 Cinderella Castle is the icon at the center of two Disney theme parks: the Magic Kingdom at Walt Disney World, and Tokyo Disneyland at the Tokyo Disney Resort. Based on Cinderella’s fairy tale castle from the 1950 film, both serve as flagship attraction for their respective theme parks. Along with Sleeping Beauty Castle, the Castle is a main symbol of The Walt Disney Company.

Cinderella Castle was completed in July 1971, after about 18 months of construction. The castle is 56 m tall, as measured from water-level. By adding the depth of the moat, 1.8 m at the bridge, it totals 58 m as indicated on Disney’s castle website for the overall height. Cinderella Castle is more than 30 m taller than Sleeping Beauty Castle at Disneyland in Anaheim, California. A set-building trick known as forced perspective makes the castle appear larger than it is. At higher elevations, its proportions to full scale are reduced for elements such as stones, windows, and doors. This castle and its near-twin in Tokyo were the tallest Disney theme park castles until the completion of the Enchanted Storybook Castle in Shanghai Disneyland Park.

Cinderella Castle is designed to reflect the late-Gothic, flamboyant style of the 1400s. Unlike Disneyland’s castle, no gold is used on the exterior; all gold colors are anodized aluminum. Despite its appearance, no bricks were used in its construction; the inner structure consists of six hundred tons of steel-braced frame construction, with a 10-inch-thick (250 mm) reinforced concrete wall encircling the structure to the full height of the outermost stone-like walls.

Cinderella Castle is also surrounded by a moat, which contains approximately 3.37 million US gallons (12,800 m3) of water. There are a total of 27 towers on the castle, each numbered 1-29—tower numbers 13 and 17 were cancelled before construction when it was discovered that they could not really be seen from anywhere in the park, due mainly to the other Fantasyland buildings. The tower with the clock in front is number 10, the tallest is number 20. Number 23 is the other golden-roofed tower.

According to en.wikipedia.org; the Source of photos: internet