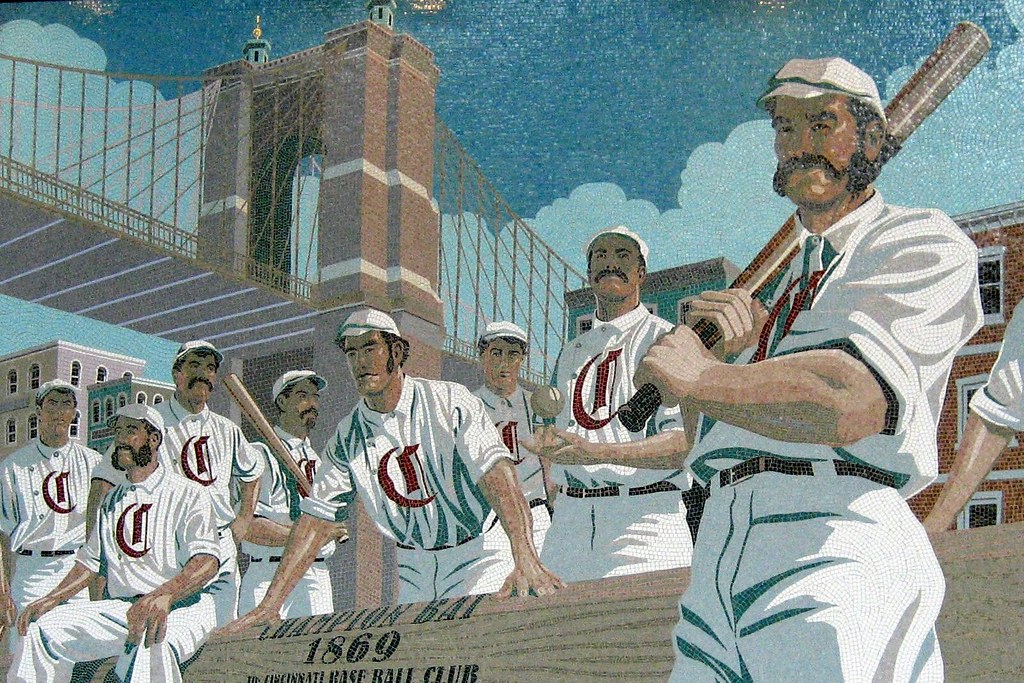 The Cincinnati Red Stockings of 1869 were baseball’s first all-professional team, with ten salaried players. The Cincinnati Base Ball Club was formed in 1866 and fielded competitive teams in the National Association of Base Ball Players (NABBP) 1867–1870, a time of a transition that ambitious Cincinnati businessmen and English-born ballplayer Harry Wright shaped as much as anyone. Major League Baseball recognized those events officially by sponsoring a centennial of professional baseball in 1969.

In 1869, the Red Stockings posted a perfect 57–0 record, the only perfect season in professional baseball history. This was the first team to play on the East and West coasts in the same season. More than 2,000 people greeted the team when it arrived in San Francisco at 10:00 p.m. “They really helped nationalize the game and put Cincinnati on the map as a baseball town,” said Greg Rhodes, a Reds historian who wrote The First Boys of Summer (Road West Publishing Company, 1994), along with Cincinnati Enquirer reporter John Erardi, about the 1869–1870 Red Stockings

Thanks partly to their on-field success and the continental scope of their tours, the Red Stockings established styles in team uniforms and team nicknames that have some currency even in the 21st century. They also established a particular color, red, as the color of Cincinnati (which continues with the city’s current team, the Reds), and they provide the ultimate origin for the use of “Red Sox” in Boston.

According to en.wikipedia.org; history.com. Source of photo: internet