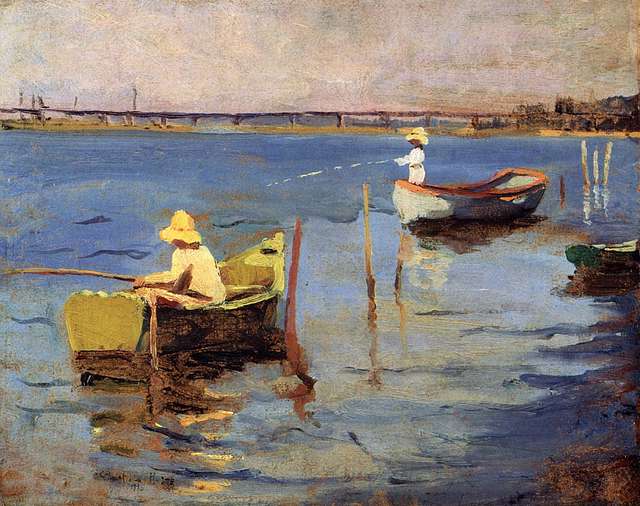 The Cape Cod School of Art was founded by Charles W. Hawthorne at the turn of the century when Impressionism was held in high esteem, art colonies were popular in Europe and summer schools of art were emerging in America. It was a time, too, when art students studied with ‘master teachers,’ following their teachers from place to place.

Beginning in 1899, Hawthorne taught his plein air method of painting on Provincetown’s waterfront in the summer and taught at the Art Students League in the winter. Typically Hawthorne’s model would be posed in bright sunlight, face shaded with a hat or parasol so no features were visible. Large groups of people watched as he painted at his easel, dramatically demonstrating his theory of color and the effects of light on an object. In 1899 Hawthorne opened his own outdoor school in Provincetown, MA – the Cape Cod School of Art – the first school to teach outdoor figure painting.

Hawthorne attracted students from all parts of the country, with as many as 90 enrolled in a session. Hawthorne taught his students to paint directly from nature. While many of them became fine Impressionist landscape artists whose works were filled with color and light, many also became noted abstract artists. Hawthorne himself was primarily a figurative painter in oils, working in a darker style of Impressionism than the one he taught.

When Hawthorne died suddenly in 1930, Henry Hensche changed the school’s name to the Cape School of Art and moved it to 48 Pearl Street, where Hawthorne had at one time maintained a studio. In the summer 2014, The Cape School returned to Charles Hawthorne’s original barn studio to teach a series of classes.