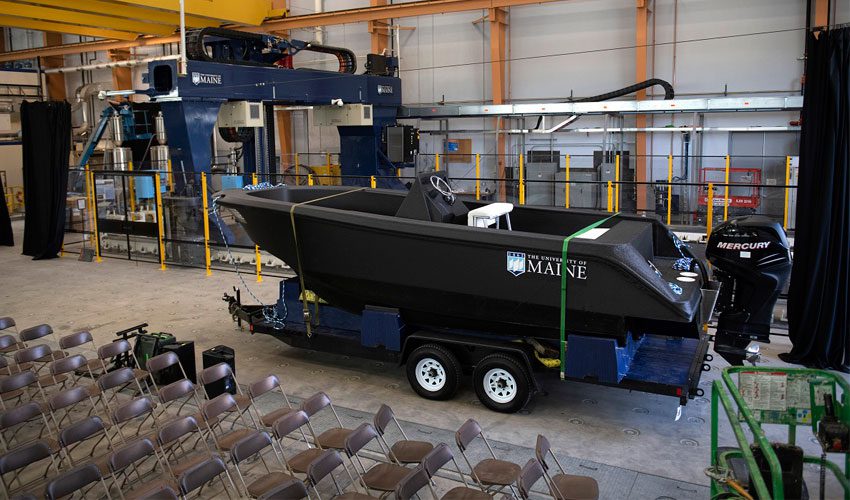 A team from the University of Maine’s Advanced Structures and Composites Center created the unprecedented 3D printer, and has now earned three World Records for it. The university has received one record for world’s largest prototype polymer 3D printer, one for the largest 3D-printed object ever made, and one for world’s largest 3D-printed boat. The announcement was made in front of an audience of community leaders, politicians, and executives at the Structures and Composites Center, which is the university’s offshore model testing facility.

The boat is no joke, either. In a UMaine press release announcing the three world records (which comes via Futurism), the university says that the boat weighs 5,000 pounds and measures 25 feet in length. The boat’s been dubbed 3Dirigo, which may sound nonsensical, but is a reference to Maine’s state motto.

In regards to what this 3D printer will actually be 3D printing, it seems like the sky’s the limit. Although the UMaine press release does note that it will be using composite materials, often ones made from a mix of cellulose nanofiber derived from the state’s local forestry, and thermoplastics. There will also apparently be a ton of applications for the military in terms of prototyping “shelters, vehicles, and other large systems….”

Moving forward, it seems like people should expect a whole lot more records to come from this mega printer. That’s because 3Dirigo only represents a fraction of what the 3D printer can actually produce. As of right now, it’s capable of making objects up to 100 feet long, 10 feet high, and 22 feet wide. Which obviously sounds huge, but is even more astounding when you think about how big industrial printers like these will be ten years from now.

According to nerdist.com and maineboats.com. Source of photos: internet